It has been so long since I’ve posted anything about Stella!  We have been busy busy with managing her.  We had a good stretch where Stella was doing fantastic!  We have since experienced two hospital stays, the second one we are still in.  The first ED visit was due to dehydration and constipation which caused her to experience a metabolic flair which means she was all out of wack, really sleepy and not responding to much.  We have had trouble with vomiting for a couple months as well.  We spent 6 days at Brenner getting her chemistries back under control, she had a long term EEG, and we were taken off the keto diet.  A lot of changes happened during this stay but Stella bounced back to her baseline pretty quickly.  When we left she was awake all day, responsive, smiling and jabbering.  Every time we have been to the hospital our Peds team has been in touch with Dr. Parikh in Cleveland and being very careful in the way they manage her, to which we are so thankful!

We were home about two weeks when I noticed she was starting to decline in similar ways as before, sleepy and not real responsive.  We took her to the ED at Brenner last Friday (5-11) where her chemistries were again out of wack.  She was given an IV that helped correct some of those lab values.  It took Stella a bit longer to bounce back this time but she has gotten back to her self.  This time Stella’s liver obviously is showing signs of some dysfunction.  Our team at Brenner felt like Stella was going to be best served at Duke because they have a metabolic team that deals with kids that have mitochondrial problems and there is a GI doc that specializes in the liver.  So here we are…today we were given a ride by the Duke life flight crew in their big blue rig an hour and a half or so down the road to Duke.  Stella is stable and okay this was just a way to get in with this team and see all the specialists we need to see in a fairly easy way.  We absolutely love the team at Brenner and feel so comfortable every time we have to go.  Coming to Duke is out of our comfort zone but we hope and pray that this is going to be what’s best for her.

While we are here Stella is going to have a port placed.  She is EXTREMELY hard to get blood from or to start an IV.  She has bee stuck at least 15 times just since last Friday.  She has hospital stays in her future where routine blood work is going to be required so this seems the most compassionate thing to do for her.  The procedure is fairly common and simple.  However putting her under is always a scare thing given ALL her issues.

So if we were to ask for anything we would ask for prayers that this procedure goes well and that we have made the right decision for her.  I don’t know exactly when it will be but will be soon.  We also pray that the dysfunction in her liver (which we know is inevitable with Alpers) will hold where it is and not get any worse for a long long time.  On a good note Stella got to see her Aunt Libby who works at Duke Eye Center!  She hasn’t seen her since Christmas!  Thank you for your prayers, they mean the world to us! 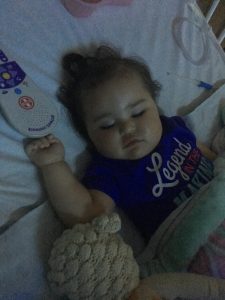